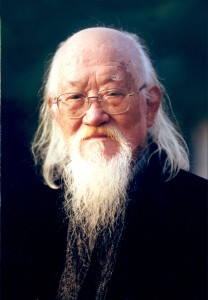 Born in the 19th year of Emperor Guangxu’s Reign of the Qing Dynasty (1893), Lu Zijian lives in Chongqing City, Sichuan Province, China. Despite his age, he is healthy and lithe.

Former head of Chinese Ba Gua Zhang Federation, he started in his young age to study wushu with his own mother and later he was accepted as disciple of Master Jiang Yin then he studied in the State Medical School of Hubei Province.