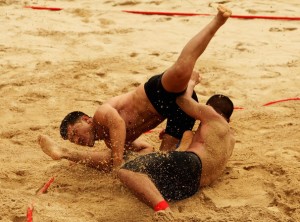 Beach Wrestling has been codified by FILA during the Athens Congress in 2004 in order to bring together all the different traditional wrestling styles practiced on sand and to make them more popular worldwide.

Beach Wrestling is practised in swimming suit within a sand circle of 6m and consists of very simple rules. A match lasts three minutes and is refereed by a single referee. To win the match, the wrestler must keep his opponent’s shoulders on the ground (victory by fall), bring him to the ground twice or push him out of the competition area twice. This new wrestling style is very popular and contributes to wrestling being more accessible and festive.

[From www.wrestlingwa.com.au. Original page is here]