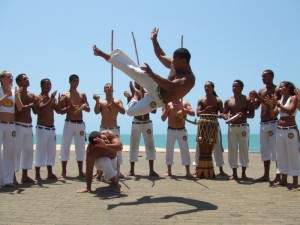 Capoeira is a Brazilian art form that combines elements of martial arts, sports, and music. It was created in Brazil mainly by descendants of African slaves with Brazilian native influences, probably beginning in the 16th century.

It is known by quick and complex moves, using mainly power kicks and quick leg sweeps, with some ground and aerial acrobatics, knee strikes, take-downs, elbow strikes, punches and headbutts. The word capoeira comes from Tupi, referring to the areas of low vegetation in the Brazilian interior.

Capoeira’s history probably begins with the adoption of African slavery in Brazil. Since the 16th century, Portugal extensively adopted slavery to man their colonies, coming mainly from West and Central Africa. Brazil, with its vast territory, was the major destination of African slaves, receiving 38.5% of all slaves sent by ships across the Atlantic Ocean. Evidences, studies and oral tradition leave little doubt about its Brazilian roots, but it is impossible to precisely identify the exact location and time it began to take form.