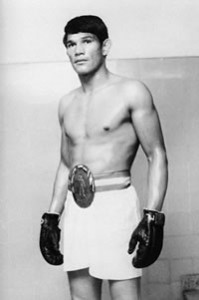 Argentina’s Carlos Monzon was one, if not the, greatest middleweight boxing champions in fistic history. Born in poverty, he was discovered in the famed Luna Park Gym by trainer Amilicar Brussa, who molded the “skinniest” 6 feet 2 incher in the world into a lethal fighting machine. Monzon developed a plodding style of standing straight up and appeared to be “pushing” his punches. But, regardless of how he looked, Monzon after losing 3 fights in the first two years of his career (later, he defeated all 3 of his victors), never lost a fight again. Married with children, he earned his trade throughout Argentina defeating a string of local club-fighters. Finally after seven years of fighting, he finally captured the World Middleweight Boxing Championship in a shocking upset over the highly favored Nino Benvenuti. Overnight, Monzon became the toast of the boxing world. Rugged, handsome, and “macho”, he became a superstar in fan appeal.

He jet-settled to Monte Carlo, Paris, Rome, and Miami Beach. He was linked romantically with Argentine actress Susana Giménez. A scandal broke when Monzon was “accidently” shot by his wife. He earned a reputation as hot-tempered and “stuck-up”. Yet, among fellow boxers, he was charming, friendly, and generous. He set a ring record by making 14 successful title defenses. A record which stood for 27 years before Bernard Hopkins broke it. Monzon retired as undefeated champion in 1977. His record was 87-3-9 with 59 knockouts. He had won his last 80 straight fights. In retirement Monzon became a noted figure on the jet-set scene. He was charged with murdering his common-law wife(and the mother of one of his children), by choking her and throwing her off a balcony. He himself tumbled off the balcony; recovering from his injuries, he was convicted of murder and sentenced to 11 years in prison.

Monzon was visited by actor Mickey Roarke in prison and is said to have boxed him in an exhibition. Monzon died in an early morning car accident, when the car he was driving (he was returning to prison after “leaving” for a “short” visit) crashed. Also killed were his two passengers, a female and a prison guard. Why Monzon was allowed to drive is a mystery, or why he was “allowed” to leave prison was yet another. Carlos Monzon was a complex and difficult man to understand. The only thing that is certain; he was a great champion.