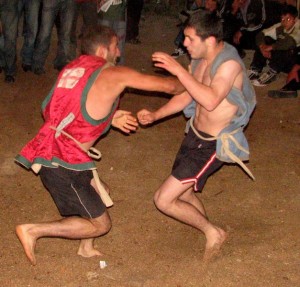 The jacket sleeves are very short or completely absent. Bottom sides of the jacket are wrapped and tied on the back in a bundle. The bundle is fixed and wrapped by the belt. Grabs are permitted of any place of the Chokha above the belt. It is also allowed to make free throws through the legs. The winner must throw the opponent shoulders down onto the mat (wrestling area) without overturning him. In the absence of clear victory the best wrestler is awarded a ‘half-victory’. Diring Chidaoba matches Georgian national music is usually played. The match takes place in a very fast pace. The duration of a single match is 5 min.

Chidaoba influenced modern wrestling development and determined success of many Georgian famous wrestlers. For example Shota Khabarelli, the coach for the Georgian Olympic Judo team, comes originally from a chidaoba background. Khabarelli used some of chidaoba’s throws to win a gold medal in the Olympics himself (On Summer Olympics 1980 he won the gold medal in Judo the half-middleweight class). One of Shota Khabarelli throws was even ultimately recognized in Judo, as the “Khabarelli pick-up“.

Sambo “self-defense without weapons”, a modern wrestling style developing since early 1920s by the Soviet Red Army to improve their hand to hand combat abilities. Roots of Sambo could be found in many regional martial arts of regions and countries that used to be a part of Soviet empire. Chidaoba, Georgian national jacket wrestling is one of those.

[From linkgeorgia.com. Original page is here]