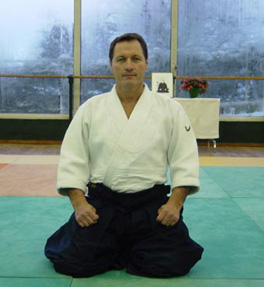 Christian Tissier (born 1951 in Paris, France) is one of the best known European Aikido teachers, who pioneered the art in France. He started training in Aikido as a child in 1962, and trained under Mutsuro Nakazono in Paris until he left for Tokyo in 1969.

He came to Aikikai Hombu Dojo as an 18 year old, and trained there for seven years. Among the teachers that have inspired him are Seigo Yamaguchi, Kisaburo Osawa and the second doshu Kisshomaru Ueshiba. While training at hombu dojo, he taught French language at a school and Institut franco-japonais de Tokyo.

He received 7th dan in 1998, and is among the handful of westerners who have been given the title Shihan by the Aikikai.