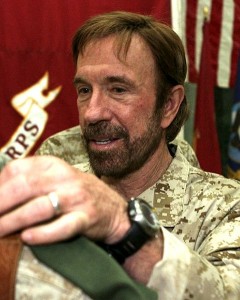 Carlos Ray “Chuck” Norris (born March 10, 1940) is an American martial artist and actor. After serving in the United States Air Force, he began his rise to fame as a martial artist and has since founded his own school, Chun Kuk Do. As a result of his “tough guy” image, an Internet phenomenon began in 2005 known as Chuck Norris facts, ascribing various implausible or even impossible feats to Norris.

Norris appeared in a number of action films, such as Way of the Dragon in which he starred alongside Bruce Lee and was The Cannon Group’s leading star in the 1980s. He next played the starring role in the television series Walker, Texas Ranger from 1993 to 2001. [1]