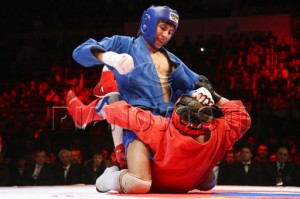 Combat Sambo is a form of fighting derived from Russian Sambo. Utilized and developed for the military, Combat Sambo resembles modern mixed martial arts, including extensive forms of striking and grappling where (unlike Sport Sambo) choking and bent joint locks are legal.

Competitors wear jackets as in sport sambo, but also hand protection and sometimes shin and head protection. The first FIAS World Combat Sambo Championships were held in 2001. A famous champion of Combat Sambo is Fedor Emelianenko.