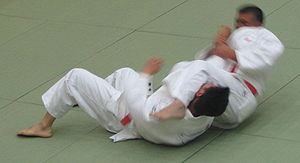 The cross armlock (juji gatame) is derived from japanese jujutsu. In general, the attacker grabs the wrist of the targeted arm of the opponent, holding and securing it by squeezing it between the thighs of the attacker.

The attacker can further increase the pressure on the elbow joint by arching his or their hips against the elbow. This is extremely effective, especially against unknowledgeable opponents.