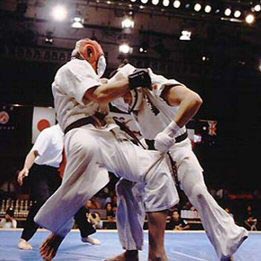 Daido Juku literally translated means “School of the Great Way”. It incorporates techniques which were not present at that time in full contact karate styles. Azuma, being a third-degree black belt in Judo as well as a 4th-degree black belt in Kyokushin karate, recognized the potential for a hybrid martial art. These would not be restricted by the boundaries of a single style but would use techniques from various martial arts, namely, at the time of its creation in 1980, Judo and Karate.

In the late 1980s and early 90s the style began to incorporate various techniques from muay thai, boxing, Jujutsu, sambo, submission wrestling, and other martial arts, fine tuning each technique for use within the Daidojuku style. One of the fundamental goals of Daidojuku being the creation of a versatile and realistic fighting style without compromising safety, Azuma created a style which incorporated various offensive as well as defensive techniques which includes punches to the head, elbow strikes, head butts, judo throws, jiu-jitsu jointlocks and other standup and ground fighting techniques.