Info about "Doshin So video" 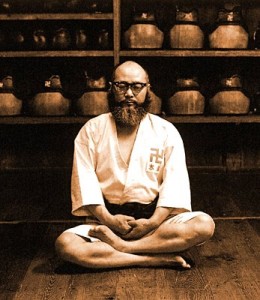 Doshin So was the creator and founder of Shorinji Kempo and the doctrine Kongo Zen. Born Michiomi Nakano, So (usually referred to as Kaisō which approximately translates as ‘the founder’) lived in the Manchuria region of China with his grandfather, and later from the mid 1920s to the end of the Second World War. During this time he practised martial arts under several masters while doing topography studies. At a later date he was introduced to Bun Taiso, a grand master of Quan Fa and became one of his students. After several years he was taken to the Shaolin temple and made the 21st master of the Giwamonken style of Quan Fa.

In 1945, when the Russian Army entered Manchuria, So managed to escape to Japan through the help of Chinese secret society members: he was finally repatriated in 1946. The grim state of affairs in postwar Japan impressed him with the need of a restoration of morality and national pride and the creation of an entirely new human image. Regarding the Dharma spirit and the practice of Kempo as means to achieve these ends, So completely revised, expanded, and systematized the many forms of Kempo he had learned in China and thus created Shorinji Kempo as it exists today.

On his return to Japan he formed the Japanese Shorinji Kempo Federation (now the World Shorinji Kempo Organization) and began teaching Buddhist philosophy in conjunction with the martial art techniques he had learned in China. During this time he changed his surname to So and started to use the on’yomi variant of his given name. In 1979 he was invited to China by the Chinese government and asked to reintroduce Quan Fa to the Shaolin temple. He died one year later (May 12, 1980), before he could take up this task. However since being founded in Japan, Shorinji Kempo has spread to 33 different countries with over 1.5 million members and is currently governed by his senior pupils and daughter Yuuki So.