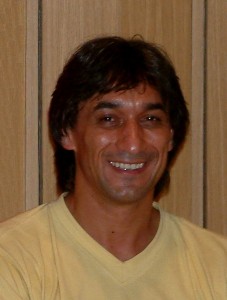 Emin Boztepe (born 17 June 1962) is an American martial artist of Turkish origin who held German nationality prior to naturalization. He first came to prominence for his fight in 1986 with noted Wing Chun practitioner William Cheung, and he continued to gain attention in the 1990s with a public challenge of the Gracie family. He was a notable member of Leung Ting’s Wing Tsun organisation until 2002, when he formed his own organisation.

Boztepe was born in Eskişehir, Turkey, the second of six children. At the age of four, his family, originally from Bağlıca village of Emirdağ, moved to Germany. According to Boztepe, his early days in Germany were difficult due to his Turkish heritage—he was a constant a target for racial insults and, more often than not, verbal abuse would escalate into physical abuse. Martial arts became something of a necessity and his father urged him to begin training. Boztepe recalled, “Germany was not the healthiest place for a young Turk in those days of growing racism and neo-Nazi movements.” He claimed to have been in over 300 street fights, many of them a result of this period, though he also claimed to have not started any of these fights.

In 1976, at the age of 14, Boztepe began studying martial arts, including Judo, Shotokan karate, wrestling, Muay Thai, and traditional boxing. During this period, he also fought as an amateur boxer in 16 matches. In 1980, Boztepe was attracted to Wing Chun when he saw a demonstration by Keith R. Kernspecht who was teaching in Kiel, Germany. He said, “Wing Tsun was really love at first sight, and it fit me. For whatever reason I was a natural.” Boztepe also began training in Latosa Escrima, which Kernspecht’s German Wing Tsun Organization had decided to make part of the family in 1982.

His fight with Traditional Wing Chun Kung Fu master William Cheung in 1986, at a seminar in Germany, caused controversy in the wider Wing Chun community. After some financial problems occurred with his master, Kernspecht, Boztepe headed to his master’s master, Leung Ting, and took special lessons from him until a financial dispute, which caused him to leave the Wing Tsun organisation. Boztepe formed his own organisation, called Emin Boztepe Martial Arts System (EBMAS), afterwards.