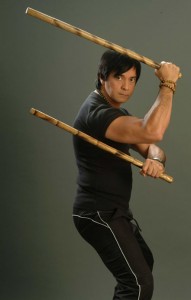 Eskrima, Arnis and Kali refer to a class of Filipino martial arts that emphasize weapon-based fighting with sticks, blades and improvised weapons. Although training starts with weapons, empty hand techniques, trapping and limb destruction are core parts of these arts as the weapon is considered merely an extension of the body. Eskrima and Arnis are the most common among the many names often used in the Philippines today to refer to these arts.

The teaching of the basic skills in Eskrima are traditionally simplified. With limited time to teach intricate moves, only techniques that were proven effective in battle and could easily be taught en masse were used. This allowed villagers, generally not professional soldiers, a measure of protection against other villages, as well as foreign invaders. This philosophy of simplicity is still used today and is the underlying base of eskrima. Because of this approach, eskrima and the Filipino martial arts in general are often mistakenly considered to be “simple”. However, this refers only to its systematization, not effectiveness. To the contrary, beyond the basic skills lies a very complex structure and a refined skillset that takes years to master.