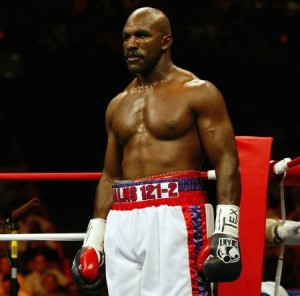 Born Oct. 19, 1962, Atmore, Ala., U.S., Holyfield is the only boxer to win a version of the heavyweight championship four separate times. Holyfield’s first title win was against James “Buster” Douglas in 1990 and he won the unified title at that time. He lost the title to Riddick Bowe in 1992, recaptured it in 1993, and lost it to Michael Moorer in 1994.

When he fought Mike Tyson in 1996, he regained only the WBA (World Boxing Association) portion of the title. In 1997 he won the IBF (International Boxing Federation) heavyweight title from Moorer. In Holyfield’s title defense against Tyson in 1997, Tyson was disqualified for biting Holyfield’s ear. Holyfield lost the IBF and WBA titles to the WBC (World Boxing Council) heavyweight champion Lennox Lewis in 1999, but Lewis later was stripped of the WBA portion of his title, and when Holyfield beat John Ruiz in the subsequent WBA title bout in 2000, he became the first man to win a championship in the heavyweight division for the fourth time.