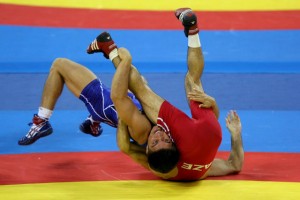 Freestyle wrestling is a style of amateur wrestling that is practised throughout the world. Along with Greco-Roman, it is one of the two styles of wrestling contested in the Olympic games. It is, along with track and field, one of the oldest organized sports in history. American high school and college wrestling is conducted under different rules and is termed scholastic and collegiate wrestling.

Freestyle wrestling, like its American counterpart, collegiate wrestling, has its greatest origins in catch-as-catch-can wrestling and, in both styles, the ultimate goal is to pin your opponent to the mat, which results in an immediate win. Freestyle and collegiate wrestling, unlike Greco-Roman, also both allow the use of the wrestler’s or his opponent’s legs in offense and defense.

According to the International Federation of Associated Wrestling Styles (FILA), freestyle wrestling is one of the four main forms of amateur competitive wrestling that are practised internationally today. Others of the main forms of wrestling are Greco-Roman and Grappling (also called submission wrestling).