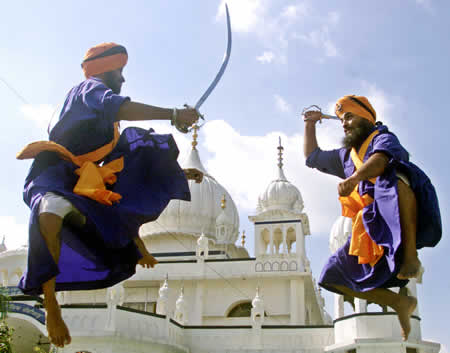 Gatka is a weapon-based performance art created by the Sikhs of the Punjab during the British Empire. It gained popularity when the British Empire banned the practise of Shastar Vidiya, which was punishable by death.

The Punjabi word gatka refers to the wooden stick used in sparring matches. The term might have originated as a diminutive of the Sanskrit word gadha or mace. A more popular theory is that it derives from the Punjabi words gat and ka. Gat means grace, liberation, and respect in one’s own power, while ka means someone who belongs or is part of a group. Gatka would therefore translate as “one whose freedom belongs to grace”.

Gatka can be practiced either as a sport (khel) or ritual (rasmi). The modern sport originated in the later 19th century, out of sword practice in the British Indian Army during the 1880s. It is played by two opponents who spar with wooden staves intended to simulate swords. The sticks may be paired with a shield. The older techniques and various other weapons are taught in the ritual aspect of the art. These are demonstrated in preset routines or performed as a sword dance during Sikh festivals. Though primarily an armed fighting style, gatka also incorporates wrestling as part of its empty-handed training component.