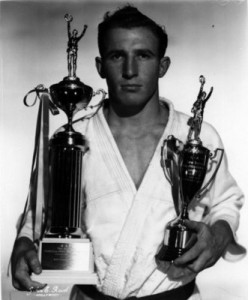 Gene obtained the nickname ‘Judo’ (along with ‘The Toughest Man Alive’ and ‘The Grandfather of Grappling’) due to his accomplishments in the art of Judo – winning many titles and tournaments. LeBell is recognized as one of the first Mixed Martial Artists (featured, as well, in the first televised MMA bout in the United States). Some of LeBell’s notable students have been Bruce Lee, Roddy Piper, Chuck Norris, Ed Parker, Gokor Chivichyan, Bob Wall, Mando Guerrero and Benny Urquidez.

The pink colored Judo Gi that has become a trademark of LeBell was a result of a laundry mixup while preparing for a competition in Japan. A pair of red shorts were mixed into the laundry that contained his Gi and turned the uniform a shade of pink. He was set to compete the following day, and being a Saturday evening when he received the now colored uniform, he had to compete in the pink uniform. This set the Japanese crowd livid (it was considered very insulting). LeBell went on to win his division.

During an interview with Joe Rogan, LeBell confirmed the long standing rumor that he had choked out Martial Artist/Actor Steven Seagal. According to LeBell, while he was working as a stunt coordinator in one of Seagals movies, Seagal had boasted that he could not be choked out because he had developed a technique to counter it. LeBell took Seagal up on his offer and applied a standing rear naked choke. Seagal struck LeBell in the “sisters” several times, but eventually passed out. LeBell commented that he must have forgotten to use the bathroom beforehand. Since then it is considered an honor to be choked out by LeBell, and even has a special patch for people who have experienced it.