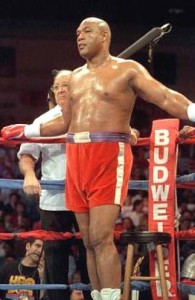 A gold medalist at the 1968 Olympics, Foreman won the world heavyweight title with a second round knockout of then-undefeated Joe Frazier in Kingston, Jamaica in 1973. He made two successful title defenses before losing to Muhammad Ali in “The Rumble in the Jungle” in 1974. He fought on but was unable to secure another title shot and retired following a loss to Jimmy Young in 1977 and became an ordained Christian minister. Ten years later Foreman announced a comeback, and in November 1994, at age 45, he regained the heavyweight championship by knocking out Michael Moorer. He remains the oldest heavyweight champion in history. He retired in 1997 at the age of 48, with a final record of 76-5, including 68 knockouts.

Foreman has been inducted into the World Boxing Hall of Fame and the International Boxing Hall of Fame. The International Boxing Research Organization (IBRO) currently rates Foreman as the eighth greatest heavyweight of all-time. In 2002, he was named one of the 25 greatest fighters of the past eighty years by Ring magazine. The Ring also ranked him as the 9th greatest puncher of all-time. He was a ringside analyst for HBO’s boxing coverage for twelve years, leaving in 2004. Outside of boxing, he is a successful entrepreneur and is known for his promotion of the George Foreman Grill, which has sold over 100 million units worldwide. In 1999 he sold the naming rights to the grill for $138 million.