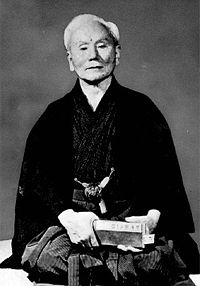 Gichin Funakoshi (November 10, 1868 – April 26, 1957) was the creator of Shotokan karate, perhaps the most widely known style of karate, and is attributed as being the ‘father of modern karate.’

As a boy, he was trained by two famous masters of that time. Each trained him in a different Okinawan martial art. From Yasutsune Azato he learned Shuri-te. From Yasutsune Itosu, he learned Naha-te. It would be the melding of these two styles that would one day become Shotokan karate.

Funakoshi-sensei is the man who introduced karate to Japan. In 1917 he was asked to perform his martial art at a physical education exhibition sponsored by the Ministry of Education. He was asked back again in 1922 for another exhibition. He was asked back a third time, but this was a special performance. He demonstrated his art for the emporer and the royal family! Atfer this, Funakoshi-sensei decided to remain in Japan and teach and promote his art.

Gichin Funakoshi passed away in 1957 at the age of 88. Aside from creating Shotokan karate and introducing it to Japan and the world, he also wrote the very book on the subject of karate, “Ryukyu Kempo: Karate-do”. He also wrote “Karate-Do Kyohan” – The Master Text, the “handbook” of Shotokan and he wrote his autobiography, “Karate-Do: My Way of Life”. These books and his art are a fitting legacy for this unassuming and gentle man.

[From gichinfunakoshi.com. Original page is here]