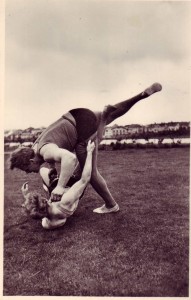 Glíma is the Icelandic national style of amateur folk wrestling. There are four points that differentiate it from other forms of wrestling:

Glima remains, as it always has been, friendly recreation and a gentleman’s sport, but as the lausataks version shows it also has a rougher side.

The core of the system are eight main brögð (techniques), which form the basic training for approximately 50 ways to execute a throw or takedown. Glima is a very old combative style. Certain evidence of glima dates back to the 12th century but some descriptions of wrestling in the Icelandic sagas and the Younger Edda makes it reasonable to believe that the system is much older.

Surrounding glima is a code of honour called Drengskapur that calls for fairness, respect for and caring about the security of one’s training partners.