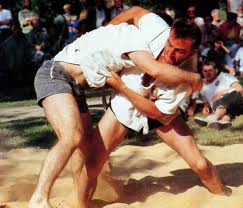 Gouren (breton wrestling) is a style of folk wrestling which has been established in Brittany for several centuries. In today’s France, Gouren is overseen by the Fédération Française de Lutte (French Wrestling Federation).

Gouren was popular in Brittany towards the beginning of the 20th century, with competitions every Sunday in some small villages. In 1930, in order to avoid the practice of gouren falling into oblivion, Charles Cottonec of Quimperlé (Finistère) breathed new life into the sport with the creation of a set of rules and the sport’s first federation, which is still active today. Today Gouren is well-organised. It has its own federation, clubs (skoliou), and its own European Championships which take place every two years. Gouren has also kept its cultural ties, and displays of the martial art can be seen alongside traditional Breton music and dance.

The wrestlers, required to fight barefoot, wear a special white shirt (roched) tied with a belt and black trousers (bragoù), and try to bring each other to the ground by grappling the other’s roched. A victory (lamm) is declared when the loser is on their back on the ground, with the winner standing; this is usually managed by tripping the opponent. Victory is only achieved when both the loser’s shoulder blades hit the ground at the same time, and before any other part of the body. Each bout lasts seven minutes maximum.