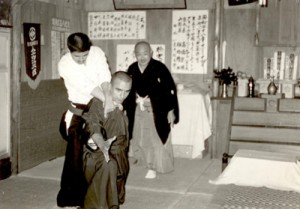 Hakkō-ryū Jujutsu is a school or ‘style’ of jujutsu related to Daito-ryu founded in 1941 by Okuyama Ryuho (1901–1987) a student of Sokaku Takeda and a practitioner of shiatsu. Many techniques of this school are very similar to those of the Daito-ryu Aikijujutsu.

The school is now headed by his son who took the name Okuyama Ryuho. The headquarters or hombu dojo is located in Ōmiya-ku, Saitama, Saitama Prefecture.

Hakkoryu comes from the Japanese language meaning “The Style of the Eighth Light.” In the color spectrum there are seven color bands. It was believed that there was also an eighth very narrow invisible band: the Eighth Light. Schools of Hakkoryu Jujutsu exercise strategies that avoid conflict as much as possible, and employ techniques that do not use strength, but instead use techniques that work against the body’s natural motions and movements to take down the opponent. These techniques are not very visible, but effective and strong, just like the eighth light. Shorinji Kempo founder Doshin So was a student of Hakko ryu.