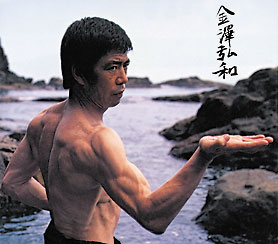 Hirokazu Kanazawa is a world-renowned Japanese master of Shotokan karate. He is the Chief instructor and President of the Shotokan Karate-Do International Federation, an organisation he founded after he left the Japan Karate Association (JKA). Kanazawa was born on 3 May 1931 in Iwate Prefecture, Japan. He trained in judo during his school years, and held the rank of 2nd dan in that martial art. He began training in karate whilst at Takushoku University under the then-head instructor of Shotokan karate, Masatoshi Nakayama. Kanazawa also learned from the founder of the Shotokan style, Gichin Funakoshi, and is one of the few living karateka (practitioners of karate) to have done so.

Kanazawa has written several books on karate, which include: Kankudai (1969), Moving Zen: One man’s journey to the heart of Karate (2001, co-authored), Karate: My life (2003), Karate fighting techniques: The complete kumite (2004, co-authored), and Black Belt Karate (2006). He has featured in Paul Walker’s book, Lessons with the Master: 279 Karate lessons with Master Hirokazu Kanazawa. The International Martial Arts Federation promoted Kanazawa to 8th dan in 1978, 9th dan in 1988, and 10th dan in 2002. Within the SKIF, he holds the rank of 8th dan, attained in 1998.