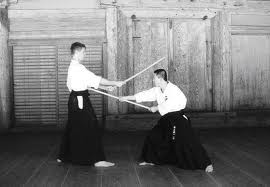 Hontai Yōshin-ryū is a traditional (koryū) school of Japanese martial arts founded c.1660, by Takagi Shigetoshi. Some sources give Takagi’s middle name as Setsuemon, while others give it as Oriemon.

This school was active during the Edo period, especially dominant in the Himeji-han and Ako-han. The present headmaster (sōke) is Inoue Kyoichi Munenori who succeeded his father Inoue Tsuyoshi Munetoshi. The handover occurred on 16 January 2005. The system teaches unarmed grappling arts and various weapon arts including bōjutsu, hanbōjutsu, iaijutsu, and kenjutsu.

Although there are a limited number of official Hontai Yōshin-ryū schools across the world, many westerners have benefited from study at the headquarters in Japan. Therefore, the school’s influence on the development of modern jujutsu is significant. The Hontai Yōshin-ryū stays true to its values and traditions and does not advocate commercialization.