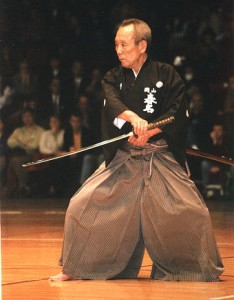 Iaidō, approximately translates as “the way of mental presence and immediate reaction”, is a Japanese martial art associated with the smooth, controlled movements of drawing the sword from its scabbard, striking or cutting an opponent, removing blood from the blade, and then replacing the sword in the scabbard. While new students of iaidō may start learning with a wooden sword (bokken) depending on the teaching style of a particular instructor, many of those who study iaidō use a blunt edged sword (iaitō). Some, usually more experienced iaidō practitioners, use a sharp edged sword (shinken).

Because iaidō is practiced with a weapon, it is almost entirely practiced using forms, or kata. Multiple person kata exists within some schools of iaidō, when those iaidōka (practitioners of iaidō) will usually use bokken for such kata practice. Iaidō does not include direct competition or sparring of any kind. Because of this non-competitive aspect, and iaidō’s emphasis on precise, controlled, fluid motion, it is sometimes referred to as “moving Zen.”

Iaidō forms (kata) are performed solitarily against one or more imaginary opponents. Some iaidō schools, however, include kata performed in pairs. Most of the styles and schools do not practice tameshigiri, cutting techniques.

A very important part of iaidō, is nukitsuke or the life of iaidō. This is a very quick draw accomplished by both drawing the sword out of the saya and moving the saya back in saya-biki. Nukitsuke is a quick horizontal cutting motion.