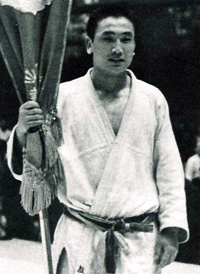 Isao Okano (born January 20, 1944) is a retired judoka who competed in the middleweight (-80 kg) division. He was born in Ryūgasaki, Ibaraki, Japan. He entered the 1964 Summer Olympics while studying at Chuo University’s law school, and won the gold medal in the middleweight division. He won another gold medal at the World Judo Championships in 1965, becoming the champion of his division at only 21 years of age.

He also won the Open weight class division of the All-Japan Judo Championships in 1967 and 1969, and placed second in the competition in 1968. He remains the lightest ever competitor to win the Open weight class of the All-Japan Championships, as he weighed around 80 kg throughout his career. He suddenly retired from competitive judo at only 25 years of age, and founded the Shoki Juku (currently the Ryutsu Keizai University’s judo team) in 1970, where he instructed future Olympic gold medalist Kazuhiro Ninomiya.

He also served as a coach for the Japanese Olympic judo team during the 1976 Summer Olympics. He later worked as a judo instructor at Keio University from 1989-1998, and the University of Tokyo from 1989-2000. He is currently an instructor and professor at Ryutsu Keizai University.