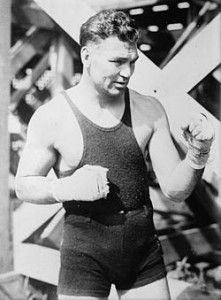 Jack Dempsey is definitely one of the most popular American boxers in history. He is known for setting the highest attendance and purse records and had the very first million dollar fight ever. Jack Dempsey was worth it, he was known for being the most savagely brutal and entertaining boxers of all time. Missing teeth, broken jaws and swollen eyes were all things one would expect from a Dempsey fight. Dempsey was described as a “superhuman wild man.”

Jack Dempsey is one of those old school genuine tough guys who used to fight in saloons for money. He reigned as heavyweight champion for 7 years, 7 years in which he severely punished his opposition trying to dethrone him. Eventually Dempsey lost his title to Gene Tunney which was the highest grossing fight in boxing history for a long time. He lost a close rematch a year later as well.

Dempsey retired and eventually opened a successful restaurant named after himself in NYC. He also has a NYC street named after him in his honor and appeared on a US stamp. The boxing world has never forgot Dempsey for his ferocity in the ring and his dominance of the Heavyweight division in his time.