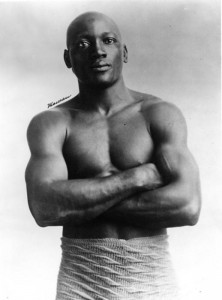 Before Muhammad Ali or Roy Jones Jr., the biggest brash, bold trash talker around was the first African American Heavyweight Champ Jack Johnson. Being the first African American Heavyweight champ alone should secure him a spot on any top ten listing. For over a decade, nobody could beat him. He humiliated his opponents, holding them up and kept them from being knocked out so he could keep beating on them. Johnson made a mockery of most of his opponents and angered white America with his defiant “in your face” antics. The press abused and discredited him, but Johnson still couldn’t be beaten. For over a decade Johnson was the most famous and hated African American on the planet. Jack Johnson is one of the most brilliant boxers of all time, employing an unusual style that made it extremely hard for his opponents to land a punch on him. Large but light on his feet, Johnson was extremely elusive, then battered away on his frustrated challengers.

During Johnson’s insurmountable reign, there was such an outcry for a great white hope that undefeated former champ James J. Jeffries stepped forth to dethrone him. Jeffries came back from retirement to prove “that a white man was better than a negro”. Jeffries trained back into great shape pummeling his sparring partners. The fight was one of the most anticipated fights in boxing history billed as “The Fight of the Century”. Referring to Jeffries, this is where the famous moniker “Great White Hope” originated.

As the fight took place, it was obvious that Johnson was too much for Jeffries and overwhelmed him. Jeffries’ corner threw in the towel before the inevitable knock out could occur. The critics were silenced from this point on. Johnson’s victory sparked numerous celebrations as well as race riots all over the country. Johnson eventually became a sole victim of jealousy and hatred. He was made an example of many times, received death threats, and was incarcerated because his wife was a white woman, for which he made travel plans with. A law meant to curb transporting women for the purpose of sexual immorality and fornication, which either way should never be a governments concern in a free country, was used to stick against Johnson.

Jack Johnson was broken down and eventually time caught up with him. He only won 2 of his last 9 fights because he attempted to keep fighting after his exile and imprisonment well into his 40’s. Perhaps in a different time, Johnson’s rise to greatness would be less stressful or obstructed by interruptions unrelated to the sport enabling him to reach his full potential. Regardless, when Jack Johnson was on top, he was in a different stratosphere and he made his point very loud and clear. Ring Magazine founder Nat Fliescher, considered Jack Johnson the greatest Heavyweight Champ of all time.