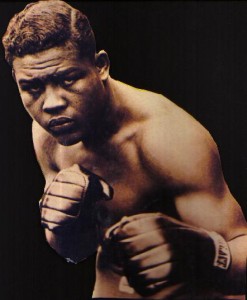 Known as “The Brown Bomber”, Joe Louis was an American Icon. He was clearly a shining star head and shoulders above the rest in his time. He couldn’t lose. Joe Louis only had 1 legitimate loss against Germany’s Max Schmeling which he later avenged in a sensational and historical 1st round KO. Joe Louis single handedly dismantled the Nazi image of invincibility and sent a direct and powerful check mate to Hitler. He gave his country a more than sensational day to remember.

Joe Louis became an American hero and symbol of national pride, and African-American pride. During this time of world war and racial inequality in America, Joe Louis was larger than boxing. Many of Joe Louis’ fights had unparalleled international, political, and social significance. All across the nation, droves of people were glued to their radios, and would explode into the streets upon many of his victories.

Because of the times, that type of fervor for boxing or for one athlete will most likely never be seen again. He was the first African-American boxer to be an American hero for whites, blacks and all Americans.

The rest of his only 3 losses came after his fall from grace. Once a proud symbol of patriotism, he was railroaded with taxes and severely in debt. This happened to him even despite donating his celebrity, money, morale, free exhibition matches and enlistment to the United States military in earlier years. Consequently, he was forced to keep fighting passed his retirement. With difficulty he still managed to win because of who he was, but suffered a pair of losses, including an embarrassing 8th round knock out right through the ropes by a fresh, up and coming Rocky Marciano. Regardless, the nation will never stop and give another boxer as much acclamation as Joe Lewis in 1938.