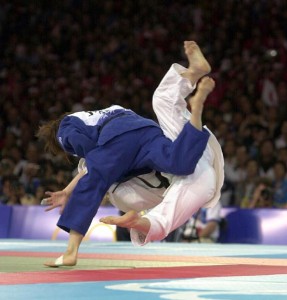 Judo (meaning “gentle way”) is a modern martial art and combat sport created in Japan in 1882 by Kano Jigoro at Kōdōkan (place for expounding the way). Its most prominent feature is its competitive element, where the object is to either throw or takedown one’s opponent to the ground, immobilize or otherwise subdue one’s opponent with a grappling maneuver, or force an opponent to submit by joint locking or by executing a strangle hold or choke. Roots of Kodokan Judo are in ancient Japanese Jujutsu: Tenjin Shinyo Ryu and Kito Ryu were major influences. [More infos on this page]

A shoulder throw is a type of hand throw that involves throwing an opponent over the shoulder. Shoulder/hand throws are called Te waza.

A hip throw involves using the thrower’s hip as a pivot point, by placing the hip in a lower position than an opponent’s center of gravity. Hip throws in Judo are called Koshi Waza, and in Aikido or Sumo they are called Koshi Nage.

In a leg reaps, the attacker uses one of their legs to reap one or both of their opponent’s legs off the ground. Generally the opponent’s weight is placed on the leg that is reaped away. This coupled with the attacker controlling the opponent’s body with their hands causes the opponent to fall over. Somewhat similar to leg reaps, leg trips involve a hooking or lifting action with the attacking leg instead of a reaping action. The border between the two types of throw can be unclear, and many throws will exhibit characteristics of both reaps and trips, however, the difference is that a reap is one smooth move, like that of a scythe, whereas a hook is pulling the opponents leg up first, and then swinging it away.

Sacrifice throws require the thrower to move to a potentially disadvantageous position in order to be executed, such as falling to the ground. The momentum of the falling body adds power to the throws and require comparatively little strength compared to the effect. In Judo, these throws are called Sutemi Waza and are further divided into front, side and wraparound throws.

Go to all Judo videos (A-Z)