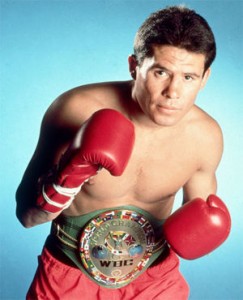 Chavez is a Mexican legend who has gone over ten years straight without a loss. He was known as a tough as nails fighter who would always bring a great fight to the table. Chavez has earned himself the uncontested distinction of being recognized as “Mexico’s Greatest Fighter”.

Chavez is a 6 time champion in 3 different divisions. He also amassed a career record of 88-0 before his first loss to Frankie Randall that he later avenged twice, the 2nd time being the most convincing. Before that he had a draw with Pernell Whitaker that many felt he lost. Chavez could take punishment all night long. Regardless, he would give punishment all night long. In order to beat Chavez a challenger would expect to go the distance, and expect to feel pain.

Chavez has beaten Roger Mayweather, Hector Camacho, Sammy Fuentes and many other great fighters through the years. Even before his retirement he was already seen as a Mexican legend who garnered respect and admiration. Chavez was always a huge boxing draw that packed stadiums and was internationally famous star in the sport. Chavez’s name is still currently resounding in the sport through his son and name sake, Julio Chavez, Jr.