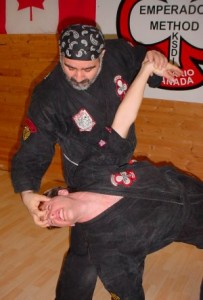 Kajukenbo is a hybrid martial art that combines Western Boxing, Judo, Jujutsu, Kenpo Karate, Eskrima, Tang Soo Do, and Kung Fu. It was founded in 1947 in Oahu, Hawaii, at the Palama Settlement. The original purpose of the art was to deal with local crime and to help the people defend themselves from U.S. Navy sailors who would drink and start fights.

The founders were Sijo (“founder”) Adriano Emperado, Peter Young Yil Choo, Joe Holck, Frank Ordonez, and George Chang (sometimes mistakenly referred to as Clarence Chang) who called themselves the Black Belt Society. The founders of Kajukenbo wanted to develop an art that would “make them invincible in the most difficult streets of Hawaii”.

Kenpo emerged as the core around which this new art was built. Although uncredited by name, other influences included American Boxing (Choo was US Army Welterweight Champion) and Eskrima (Emperado also studied Kali and Arnis Escrima). From its beginnings Kajukenbo was an eclectic and adaptive art. As time has passed Kajukenbo has continued to change and evolve. Currently there are a few distinct “recognized” branches of Kajukenbo: Kenpo (“Emperado Method” or “Traditional Hard Style”), Tum Pai, Chu’an Fa, Wun Hop Kuen Do, and the Gaylord Method. In addition there are numerous “unrecognized” branches, including CHA-3 and Kenkabo. While this may be confusing for an outsider, it is the essence of the art. Students are not required to mimic the teacher, but are encouraged to develop their own “expression” of the art.