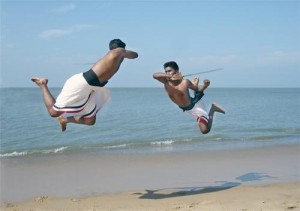 Kalaripayat is a martial art from the Indian state of Kerala. One of the oldest fighting systems in existence, it is practiced in Kerala and contiguous parts of Tamil Nadu and Karnataka as well as northeastern Sri Lanka and among the Malayali community of Malaysia. It was practiced primarily by the Nairs, the martial caste of Kerala, and also by some other castes such as the Nadars, Ezhavas and the Mappilas.

Kalari payat includes strikes, kicks, grappling, preset forms, weaponry and healing methods. Regional variants are classified according to geographical position in Kerala; these are the northern style of the Malayalis, the southern style of the Tamils and the central style from inner Kerala. Northern kalari payat is based on the principle of hard technique, while the southern style primarily follows the soft techniques, even though both systems make use of internal and external concepts.

Some of the choreographed sparring in kalari payat can be applied to dance and kathakali dancers who knew martial arts were believed to be markedly better than the other performers. Some traditional Indian dance schools still incorporate kalaripayat as part of their exercise regimen.