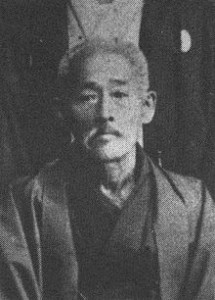 Kanryo Higaonna (March 10, 1853 – December 1916), also known as “Higashionna West”, was a native of Nishi-shin-machi, Naha, Okinawa. He was born in Nishimura, Naha to a merchant family, whose business was selling firewood, an expensive commodity in the Ryukyu Islands. He founded the fighting style later to be known as Gōjū ryū karate.

His style was distinguished by its integration of both go-no (hard) and ju-no (soft) techniques in one system. He became so prominent that the name “Naha-te” became identified with Higaonna Kanryo’s system.

Kanryo was noted for his powerful Sanchin kata, or form. Students reported that the wooden floor would be hot from the gripping of his feet.