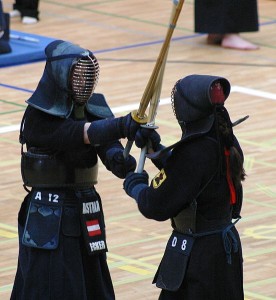 Kendo, meaning “Way of The Sword”, is a modern Japanese martial art of sword-fighting based on traditional samurai swordsmanship, or kenjutsu. Kendo is a physically and mentally challenging activity that combines strong martial arts values with sport-like physical elements.

Practitioners of Kendo are called Kendōka, meaning “someone who practices Kendo”, or occasionally kenshi, meaning “swordsman”. and the old term of kendoists sometimes is used. The “Kodansha Meibo” (a register of dan graded members of the All Japan Kendo Federation) shows that as of September 2007, there were 1.48 million registered dan graded Kendōka in Japan. According to the survey conducted by the All Japan Kendo Federation, the number of active Kendo practitioners in Japan is 477 thousand in which 290 thousand dan holders are included.

From these figures, the All Japan Kendo Federation estimates that the number of “Kendōka” in Japan is 1.66 million by adding the number of the registered dan holders and the active Kendo practitioners without dan grade.