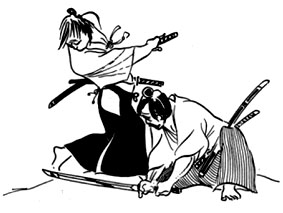 Kenjutsu, meaning “the method, or technique, of the sword.” This is opposed to kendo, which means the way of the sword. Kenjutsu is the umbrella term for all traditional (koryū) schools of Japanese swordsmanship, in particular those that predate the Meiji Restoration. It sometimes more generally describes any martial art that uses the Japanese sword, including the modern styles of Kendo and Iaido that emerged from the traditional schools in the late 19th century.

The exact activities undertaken when practising kenjutsu vary with school, but commonly include practice of basic techniques (kihon) without opponent and techniques where two persons paired kata (featuring full contact strikes in some styles). Historically schools incorporated sparring under a variety of conditions, from using solid wooden bokutō to use of bamboo sword (shinai) and armor (bogu). In modern times sparring in Japanese swordsmanship is more strongly associated with Kendo.