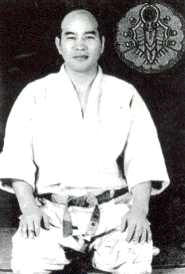 Kenshiro Abbe (15 December 1915 – 1 December 1985) was a prominent Japanese master of Judo, Aikido, and Kendo. He introduced Aikido to the United Kingdom in 1955, and founded the Kyushindo system.

Abbe was a graduate of the famous Budo Senmon Gakko, having studied judo and kendo there. Following an illustrious early career in the martial arts, he served in the Imperial Japanese Army before and during World War II. He then trained in aikido under its founder, Morihei Ueshiba, for a decade.

Abbe held dan ranks in several martial arts, most notably 8th dan in Judo, 6th dan in aikido, and 6th dan in Kendo. After introducing aikido to the UK, he established several Japanese martial arts councils there during the late 1950s. He returned to Japan in 1964 and remained there for most of the remainder of his life. There are contradictory accounts of Abbe’s final years, but it appears that he was in poor spirits and poor health towards the end.