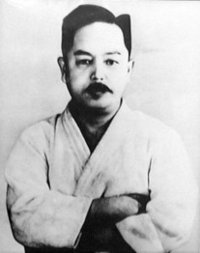 Kenwa Mabuni (1889 – 1952) was one of the first karateka to teach karate on mainland Japan and is creditied as developing the style known as Shitō-ryū. Mabuni was born on november 14, 1889 at Okinawa, Shuri in Japan. Kenwa mabuni was descendant of the famous Onikusukuni samurai family. To improve his week body, he joined under the legend master Itosu acadamy and started to learn the art of shuri-te at the age 13.

He learned this art with so much interest. After seeing this interest, his close friend Chojun Miyagi introduced him to master Higaonna Kanryo who teach the art of naha-te. Kenwa mabuni became expert in this art also. Also he studied from Seisho aragaki and some instructors. He introduced new style of karate namely Shito ryu at 1915. In 1918, Kenwa mabuni was important figure in martial arts field.

Then he worked as a police man after complete his higher studies. In 1929, he shifted to osaka permanently an became full time karate instructor. His style originally called Hanko ryu or “Half hard style”. He published so many books about the developing style Shito ryu. Then he teached the developed art to police mans. It was teached in schools and colleges after the second world war, with redeveloped karate. Then his new kind of martial art spread all over the Japan. The great master died on may 23, 1952.