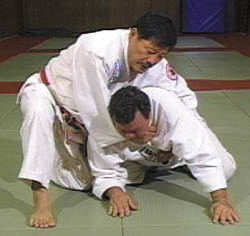 Kosen judo is the name given to the style of Judo practiced at kosen schools in Japan at the turn of the 20th century. Their training is best known for the extra focus given ground grappling techniques, referred to as newaza Japanese martial arts.

The rules of a Kosen Judo match were the same set of rules of pre–World War Judo, which, in contrast with current Judo rules, allowed direct transition to newaza (ground grappling) without the mandatory skillful application of a movement to unbalance the adversary first. This allowed for scenarios where one less skilled Judoka could drag down the other into newaza (a tactic modernly known as pulling-guard), and this was exploited by some university teams that matched their less skilled students against the more skilled students of the rival teams, aiming at a (generally easier to achieve) draw in newaza.

To achieve victory under the Judo rules of the time the judoka had to score Ippon (full point) as there were no intermediate scores, or a draw was declared at the referee’s discretion. Since Kosen Judo followed the same rules, only techniques resulting in ippon determined the winner. Ippon could be achieved via submission, a perfect throw (a throw displaying control, force and speed, landing the opponent largely onto his back), osaekomi/pin hold or by stoppage due to the impossibility of a judoka to continue (unconsciousness, broken limbs, etc.). Differently to modern Judo rules leg-locks were allowed. (Leg-locks started being prohibited by Kodokan rules in 1914 in shiai and randori as well. By 1925 all joint-locks except elbow locks was totally prohibited together with neck cranks. Kosen rules, being the Kodokan rules derivative, did not allow leg-locks absolutely).