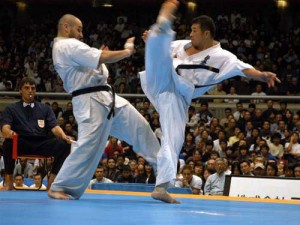 Kyokushin kaikan Karate-do is a style of stand-up, full contact karate, founded in 1964 by Korean-Japanese karate master, Masutatsu Oyama who was born under the name Choi Young-Eui.

Kyokushinkai is Japanese for “the society of the ultimate truth”. Kyokushin is rooted in a philosophy of self-improvement, discipline and hard training. Its full contact style has had international appeal (practitioners have over the last 40+ years numbered more than 12 million).

Kyokushin has influenced many of the “Full-Contact” schools of karate, emphasizing realistic combat, physical toughness, and practicality in its training curriculum. The Knockdown karate competition system pioneered by Kyokushin has been adopted by many different karate styles and organizations. Other martial arts organizations have “spun off” from Kyokushin over the years, with some changing the combat repertory by adding various techniques, such as grappling, but continuing with the same philosophy of realistic and practical training methodology. [1]