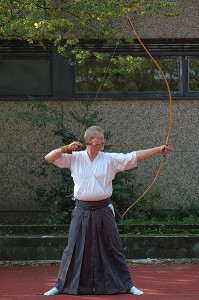 Kyudo, which literally means “The Way of the Bow”, is considered by many to be the purest of all the martial ways. In the past, the Japanese bow was used for hunting, war, court ceremonies, games, and contests of skill. The original word for Japanese archery was kyujutsu (bow technique) which encompassed the skills and techniques of the warrior archer. Some of the ancient schools, known as ryu, survive today, along with the  ancient ceremonies and games, but the days where the Japanese bow was used as a weapon are long past. Modern Kyudo is practiced primarily as a method of physical, moral, and spiritual development.

No one knows exactly when the term Kyudo came into being but it was not until the late nineteenth century when practice centered almost exclusively around individual practice that the term gained general acceptance. The essence of modern Kyudo is said to be synonymous with the pursuit of truth, goodness, and beauty.

Truth in Kyudo is manifested in shooting that is pure and right-minded, where the three elements of attitude, movement, and technique unite in a state of perfect harmony. A true shot in Kyudo is not just one that hits the center of the target, but one where the arrow can be said to exist in the target before its release.

Goodness encompasses such qualities as courtesy, compassion, morality, and non-aggression. In Kyudo, goodness is shown by displaying proper attitude and behavior in all situations. A good Kyudo archer is a person who maintains his or her composure and grace even in times of great stress or conflict.

Beauty both enhances life and stimulates the spirit. In Kyudo, truth and goodness, themselves, are considered beautiful. Beauty can also be found in the exquisite grace and artistry of the Japanese bow and the elegance of the traditional archer’s attire. It is also present in the refined etiquette that surrounds the Kyudo ceremony. Etiquette, which is simply common courtesy and respect for others, is an essential element of Kyudo practice.