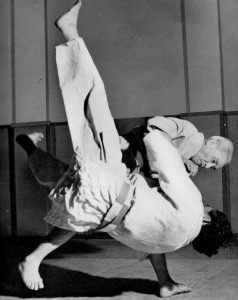 Kyuzo Mifune (April 21, 1883 – January 27, 1965) has been categorized as one of the greatest exponents of the art of Judo after the founder, Jigoro Kano. He is considered by many to be the greatest judo technician ever, after Kanō. Kyuzo Mifune became so famous in Judo circles that in referring to him the terms 10th Dan alone was sufficient. He was awarded 10th Dan in 1920. Judo legends says that in his 60 years of practise Kyuzo Mifune never lost a match and was never thrown. Judo has in the modern era gain great popularity and in part this is down to the driving force of Kyuzo Mifune. His book the cannon of judo originally published in 1960 is credited with helping in the formation of the International Judo Association and entry into the Olympic games.

What brought Kyuzo Mifune to Judo? Mifune was born a year after the Kodokan was founded, April 21, 1883 in Kuji City, Iwate Prefecture on Honshu Island. He was apparently incorrigible as a boy, always either performing some mischief himself or organizing others in the same pursuit. He was both bright and cocky. At age 13, his father, a strict disciplinarian who finally gave up on the youngest of his seven children, sent Mifune to a junior high school at Sendai, in northern Japan. There, he discovered Judo, and decided to dedicate himself to it. At age 14, he defeated nine opponents in a row at one tournament with another high school and a legend began. He became one of Jigoro Kano”s (the father of judo) closest students. He was not physically very big with a height of 159 cm and 56kg. However he over came this with his persistent hard training and scientific approach to training.

His father, finding out he was spending more time at Judo than studying, cut off his allowance, and Mifune, now 22, went out to find work. He began a newspaper, sold advertising, and built it into a thriving enterprise. He was able to sell it at a substantial profit, and entered the economics program at Keio University. He became known as the “God of Judo” after developing many new judo moves plus his reputation for being unbeaten. In 1964, Mifune served as an official at the Tokyo Olympic Games, even though he had been diagnosed with throat cancer. In December of that year, he entered a hospital, and died there January 27, 1965, 81 years old. At the time of his death, he was the last of the Judans of Kodokan Judo