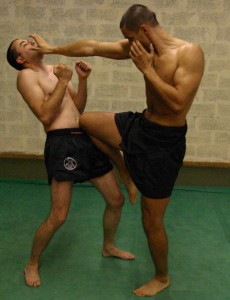 Lethwei is an unarmed Burmese martial art. It is similar to related styles of Indochinese kickboxing, namely Muay Thai from Thailand, pradal serey from Cambodia, Muay Lao from Laos and tomoi from Malaysia.

Lethwei was based on a combination of boxing arts from India and China, known respectively as musti-yuddha and shoupo. Matches were held for entertainment and were popular with every strata of society. Participation was open to any male, whether king or commoner. At the time, matches took place in sandpits instead of rings. Boxers fought without protective equipment, only wrapping their hands in hemp or gauze. There were no draws and no point system, the fight went on until one of the participants was knocked out or could no longer continue.

The Myanmar government has made some organisational changes to make Burmese boxing more marketable internationally. There are a number of Burmese boxers who do compete in Thailand professionally with varying degrees of success.