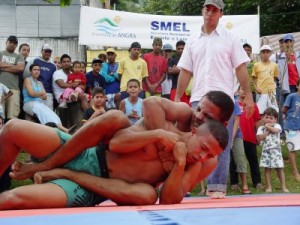 Luta Livre esportiva was created in the mid-20th century in Rio de Janeiro by Euclydes “Tatu” Hatem who fought and defeated George Gracie in the 40s.

The system focused on Ground fighting and submissions due to their importance in Vale tudo matches. In the 1970’s Luta Livre was strongly influenced by father and son duo Fausto and Carlos Brunocilla. The Brunocilla were Tatu’s pupils and were in turn responsible for graduating many Luta Livre Masters.

Another influential figure in the development of Luta Livre was Roberto Leitao, a University professor of Engineering who had devoted many years to Wrestling and Judo. Since he was of smaller physical stature than most athletes from the rowing club, Leitao had to prevail by technique, much like Royce Gracie did in UFC 1 with Brazilian Jiu-Jitsu.

Luta Livre evolved and was brought to Germany in 1995 by Daniel D’Dane where he taught Luta Livre to a handful of people in Cologne and became a mentor to Andreas Schmidt.