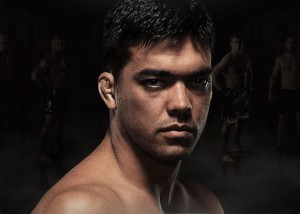 Lyoto Carvalho Machida (born May 30, 1978) is a Japanese-Brazilian mixed martial artist from Belém, Brazil who fights as a Light Heavyweight in the Ultimate Fighting Championship (UFC). He is a former UFC Light Heavyweight Champion and holds notables wins over former UFC champions Rich Franklin, B.J. Penn, Tito Ortiz, Rashad Evans, Randy Couture, and Maurício Rua. He is currently ranked as the No.5 light heavyweight fighter in the world by Sherdog & Yahoo! Sports. The son of a Japanese Shotokan karate master, Yoshizo Machida, Machida utilizes a karate striking style that implements a wide Shotokan stance and an elusive strategy.

On May 23, 2009, Machida won the UFC light-heavyweight championship from the previously undefeated Rashad Evans by knockout in the second round. Machida subsequently lost his title, and his undefeated streak, on May 8, 2010, when he was knocked out in the first round by Mauricio Rua in their rematch. Machida was named one of the Top 10 Most Superstitious Athletes by Men’s Fitness. He is the only man who holds a victory over former UFC Light Heavyweight Champion Rashad Evans and the only man to knock out Light Heavyweight Fighter Thiago Silva.