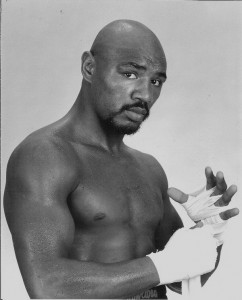 Marvelous Marvin Hagler (born Marvin Nathaniel Hagler, in Newark, New Jersey, May 23, 1954), is a former professional boxer who was undisputed world middleweight champion between 1980 and 1987.

Hagler was one of the best middleweight fighters of recent years and an All-Time great; He was a hard hitting left-hander who was capable of adapting his style, if need be, to overcome his opposition; In addition, he was never knocked out during his career

The quality of his opposition has been challenged by some but, nevertheless, he was one of the best middleweights ever; Marvin experienced but three loses during his career; His most impressive wins came against Thomas Hearns, Bennie Briscoe, Roberto Duran and John Mugabi; As champion, he defended the title successfully 12 times

Herb Goldman ranked Hagler as the #3 All-Time Middleweight; Marvin was inducted into the International Boxing Hall of Fame in 1993