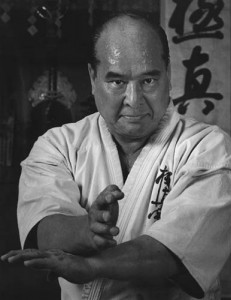 Mas Oyama was The founder of Kyokushinkai Karate. He was born in 1923 near Seoul in South Korea. He studied Chinese Kempo at 9 years of age. When he was 12, he went to Japan to live and enrolled at University. After mastering Judo, he became a pupil of Gichin Funakoshi himself making such rapid progress that at 17 he was 2nd Dan and at 24 became 4th Dan. Deciding that he wanted to devote the rest of his life to spreading the knowledge of Karate, he spent the next year in seclusion from human society, living in temples and in the mountains; subjecting himself to the physical rigours of martial arts training day and night and meditating on Zen precepts, seeking enlightenment. In 1951 he returned to civilisation and started his own training hall in Tokyo.

In 1952, he travelled the United States for a year, demonstrating his karate live and on national television. During subsequent years, he took on all challengers, resulting in fights with 270 different people. The vast majority of these were defeated with one punch! A fight never lasted more than three minutes, and most rarely lasted more than a few seconds. His fighting principle was simple — if he got through to you, that was it.

In 1953, Mas Oyama opened his first “Dojo”, a grass lot in Mejiro in Tokyo. In 1956, the first real Dojo was opened in a former ballet studio behind Rikkyo University, 500 meters from the location of the current Japanese Honbu dojo (headquarters). By 1957 there were 700 members, despite the high drop-out rate due to the harshness of training.

Sadly, Sosai Mas Oyama died, of lung cancer (as a non-smoker), at the age of 70 in April 1994, leaving the then 5th Dan Akiyoshi Matsui in charge of the organisation. This has had many political and economic ramifications throughout the Kyokushin world, which are still being resolved. In the end, the result may well be a splintering of Kyokushin, much like Shotokan now appears to have done, with each group claiming to be the one-and-only true heir of Mas Oyama’s Kyokushin, either spiritually or even financially. It has even been suggested, not entirely in jest, by one Kyokushin writer in Australia (Harry Rogers) that maybe Oyama created the turmoil on purpose, because he didn’t want Kyokushin to survive without him! It is however reasonably certain that all Kyokushin groups, regardless of their ultimate allegiance, will still maintain the standards set by Mas Oyama.