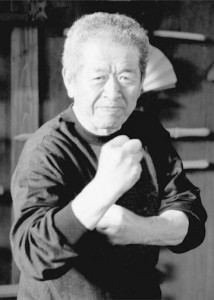 Soke Masaaki Hatsumi was born in 1931. After training in various martial arts he found Takamatsu Toshitsugu who became his mentor and studied under him for the next fifteen years, becoming the 34th Grand Master of Togakureryu Ninjutsu and eight other Japanese martial arts. Dr. Hatsumi unified the nine martial arts systems under one banner, the Bujinkan.

Dr. Masaaki Hatsumi has tought thousands of individual students through out the years from all over the world, in addition to instructing hunderds law enforcement agencies. He has been honored and praised from politicians and spiritual leaders of many nationalities. He is a professional osteopath by trade, acted in popular Japanese television series, produced many book and DVDs on Ninjustu and Budo, and has for many years been vice chairman of the Japan Literary Artists´ Club.

Masaaki Hatsumi, founder and grandmaster of the Bujinkan martial arts system, was awarded by the Japanese government the International Culture Award. This the highest honor given for cultural exchange, was bestowed on Dr. Hatsumi by a member of the Imperial Household on November 22, 1999.