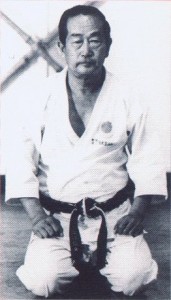 Masatoshi Nakayama (April 13, 1913 – April 15, 1987) was an internationally-renowned Japanese master of Shotokan karate. He helped establish the Japan Karate Association (JKA) in 1949, and wrote many textbooks on karate, which served to popularize his martial art.

For almost 40 years, until his death in 1987, Nakayama worked to spread Shotokan karate around the world. He was the first master in Shotokan history to attain the rank of 9th dan while alive, and was posthumously awarded the rank of 10th dan.

Nakayama wrote many books on karate, perhaps most notably the 11-volume Best Karate series. He also had many video productions credited to him. Nakayama’s books include: Practical Karate: A guide to everyman’s self-defense (1963, co-authored), Practical Karate: Defense against an unarmed assailant (1963, co-authored), Best Karate: Comprehensive (1977), and Dynamic Karate (1986). Martial arts scholar Donn Draeger was one of Nakayama’s well-known co-authors.