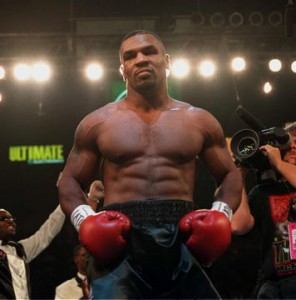 Mike Tyson is one of the most notorious boxers in prizefighting history thanks to his actions both inside the ring and out. His speed, power and angry aggression earned him the World Boxing Council heavyweight title in 1986, making him the youngest champion ever. The next year he won the World Boxing Association title and “Iron Mike” became the undisputed heavyweight champion of the world.

In 1988, in one of his most famous fights, Tyson knocked out previously undefeated Michael Spinks in 91 seconds and earned $20 million. For a brief time he seemed invincible, until he was knocked out by the lightly-regarded James “Buster” Douglas in 1990. Then Tyson began making headlines for different reasons: his brief marriage to actress Robin Givens was followed by a bitter divorce battle; he was convicted of rape in 1992 and spent three years in prison; a comeback was stymied in 1997 when he bit off a chunk of Evander Holyfield’s ear in the middle of a match; he was jailed briefly again in 1999 for assault; and at a 2002 press conference to announce an upcoming bout, he attacked opponent Lennox Lewis and bit his leg. (The fight took place anyway on 8 June 2002, and Lennox knocked out Tyson in the eighth round).

Tyson’s fans considered him a troubled youth who battled long odds to become one the sport’s greatest names; his detractors said his behavior gave the sport a black eye. Tyson’s fight career never quite recovered after his stint in jail, and he said he “most likely” wouldn’t fight again after being defeated in a 7th-round technical knockout by journeyman heavyweight Kevin McBride on 11 June 2005.